The earliest attempt at making a treadle-operated press with a hinged platen was that of Daniel Treadwell (1791-1872.) Treadwell, an American living in England, devised a press and had the Scottish press builder David Napier to build it in 1821. It was made of wood, and incorporated a rotating ink disk for the first time. A lack of interest by British master printers, and hostility by workers, led Treadwell to abandon it. He returned to America and became a professor at Harvard in 1835.

American developers of the platen press

George Phineas Gordon (1810-1878) claimed that Benjamin Franklin appeared to him in a dream and described the mechanism of a platen job press. In gratitude he called the invention the “Franklin,” but it is worth noting that Gordon also received—and acknowledged—considerable non-ectoplasmic help from a predecessor, Stephen P. Ruggles (1808-1880) of Boston. In a letter dated October l l, 1873, Gordon wrote to Ruggles1:

. . . I have, in times gone by, most cheerfully accorded to Ruggles the introduction—the origination—of the treadle job press. I have ever said the conception was YOURS, and that your efforts, skill and persistency against great opposing obstacles introduced it. Glory enough for one man . . .I shall be ready, ever, to accord my testimony . . . to set you right in the eyes of the world, as the pioneer and the great prototype of job printing-presses; and the one which all other builders have taken as their great model . . . Had it not been for Stephen P. Ruggles I should not have been where I am today. I should never have built a printing-press. . .

This gracious acknowledgment was later printed in the Typographic Advertiser in 1879, a year after Gordon’s death. Gordon’s presses are very familiar to all letterpress printers, and are still very much with us in small job shops and amateur printing shops everywhere. But Ruggles’ presses are hardly to be seen anywhere. (Two of them are in the Smithsonian’s collection and one of these has been used for printing in recent years.)

Ruggles and the invention of the first job press

Stephen P. Ruggles was born July 4, 1808 in Windsor, Vermont. He was apprenticed to a printer there, but his mechanical bent appeared early. While still an apprentice he made an early attempt at inking the forms of a hand press by means of an automated roller. In 1826 he went to Boston, which at that time was a center of press invention and building. He worked as a pressman, and in his spare time devised and built a cylinder power printing press on which the Ladies Magazine was printed.

In his autobiography Ruggles wrote “In 1830 or 1831 I invented and built, in New York, in Minor’s machine shop, the first card or job press, I believe, ever constructed in any part of the world. This press worked with a vibrating platen and was the first press ever contrived to receive, on its platen, the paper, or card to be printed.2”

This press was operated by Ruggles in the office of Daniel Fanshaw in the American Tract Society building in New York. The press was able to print enameled cards and became a great favorite with printers and “a source of considerable profit for several years” to Ruggles. No picture of this press is known, but it should be noted, lest we think of it as a modern jobber, that it was built of wood. We have the authority of Thomas MacKellar that “he built another wooden press, on the same plan, for the use of George P. Gordon in his business of card and job printing.” This meeting of Ruggles and Gordon was to have a major impact on the development of the platen press.

Ruggles returned to Boston in 1833 and there continued the manufacture of the press, but in iron instead of wood. In 1840 he invented a power job printing machine, the first of which was in the office of Samuel Dickinson, a fine printer and later a leading typefounder. According to MacKellar, “this machine enabled a boy to print thirty sheets in the time required for a man and boy to print four sheets on the old hand-press. Mr. Ruggles got up various sizes and styles of job and card presses, and furnished Mr. Gordon with such as he required, and made him an agent for the sale of the machines.3”

It should be noted that the “power” supplied to the press originated with the foot of the pressman, applied to a treadle. He received his patent for this press November 10, 1840, and manufactured it in four sizes. 4

Although this press was a great advance, it left room for improvement. It was known among printers as “the upside-down press” because the bed containing the form was placed above the platen, which moved upward to make the impression. About 1500 to 2000 impressions per hour were possible, a great improvement over the 250 impressions per hour of the hand press – which usually had two men to work it. 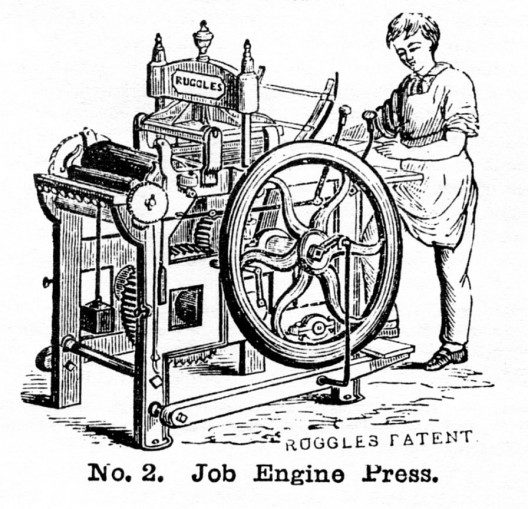 For several years after this Ruggles invented machinery for printers, including stereotype plate shaving machines, lathes, and gear-designing apparatus. In 1849 he returned to presses with the Ruggles Rotary Job and Card Press, from which the modern platen jobber is descended. Some of the features of this press were the same as in his earliest card press of 1831, but now arranged in a more convenient manner. 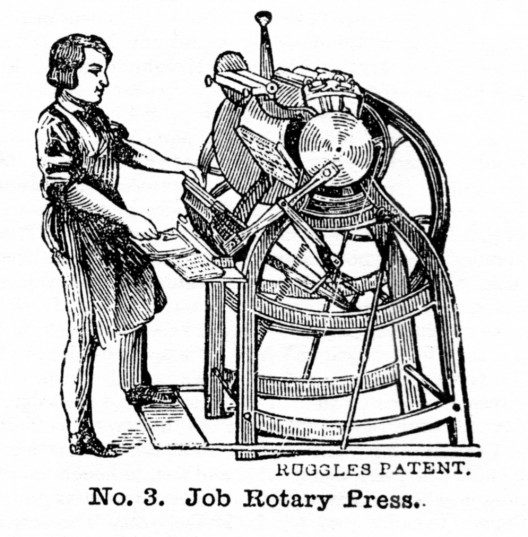 In 1854 Ruggles sold all his patents and the good will of his business to the S. P. Ruggles Power Press Manufacturing Co. in Boston, and retired with a fortune of over $500,000. He sold out at the right time, because George Gordon’s presses were beginning to take away his market. But he continued to invent; in 1859 he received a patent for an iron hand press that made use of a screw – the patent model is on display at the Smithsonian and the only known full size press is in the stacks at Harvard’s Houghton Library. Ruggles died in 1880. 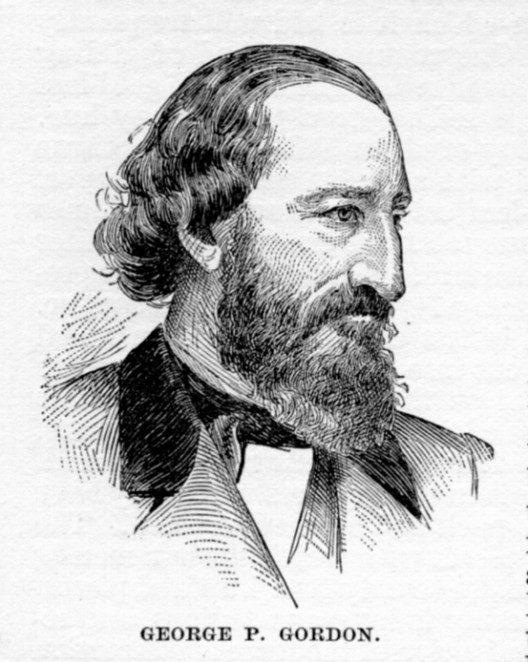 As we have seen, Ruggles had provided one of his earliest card presses to New York City printer George Phineas Gordon. Gordon was born April 21, 1810 in Salem, New Hampshire – another ingenious Yankee mechanic. After a brief venture as an actor, as early as 1835 he is recorded as inventing a “Speedy Card Press,” no doubt taking his inspiration from the Ruggles press. It was not patented and we do not know what it looks like. He returned to the printing trade for several years, and his first press patent was granted March 26, 18505, when Ruggles’ “upside down press” had been on the market a full ten years. Gordon’s press was similar but had the virtue of not suspending the type upside down. Ralph Green, an historian of the platen press, has written that to the best of his knowledge, no example of this press or picture of it has ever been found. (However the patent drawing exists, from which we can get a good idea of the press.) 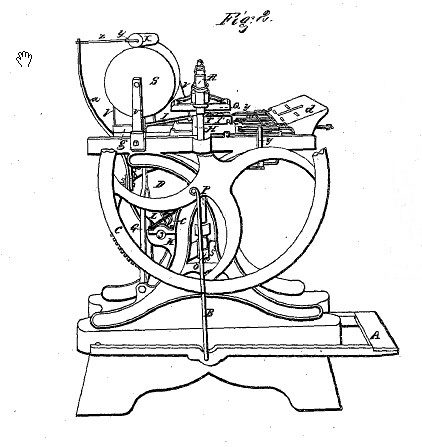 
The following year, 1851, Gordon brought out his “Alligator” press. The press was reliable and fast, although its snapping jaws were an ever-present danger to careless printers’ fingers. It had a good sale for several years. The only known surviving Alligator is owned by the Nebraska State Historical Society and is currently on loan to the International Printing Museum in Buena Park, California.

On August 5, 1851 Gordon was granted another patent, one which was the basic design for his later, immensely successful presses. This press, called the “Turnover,” was objected to by an unnamed patent owner – perhaps Ruggles – who claimed that it violated his rights.6

The press was called the “Turnover” because of the novel movement of the platen. Within a few years Gordon had simplified and improved it greatly. By 1858 it appeared essentially in its final form, and was named the Franklin press; this is the press that Gordon, a spiritualist, said had been described to him by Ben Franklin in a dream. 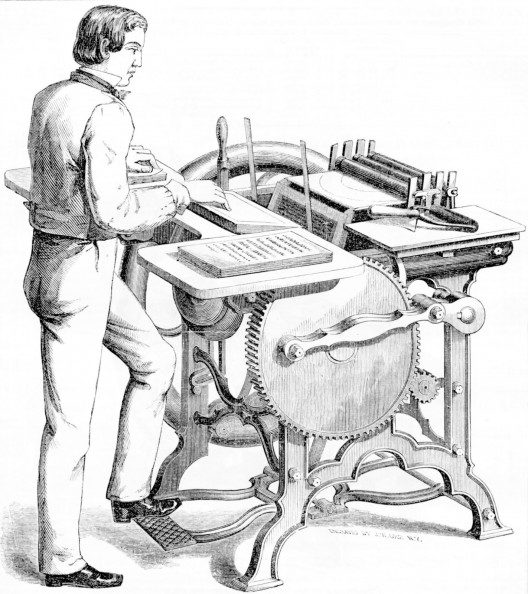 Although Gordon sold thousands of presses during his career, most were made for him by outside machine shops. At the height of the press’s popularity, however, in 1872 Gordon built his own factory in Rahway, New Jersey, with a capacity of 600 presses a year. (In 1901 the factory and right to use the name Gordon on its presses were bought by Chandler and Price.) The factory closed down in 1909. 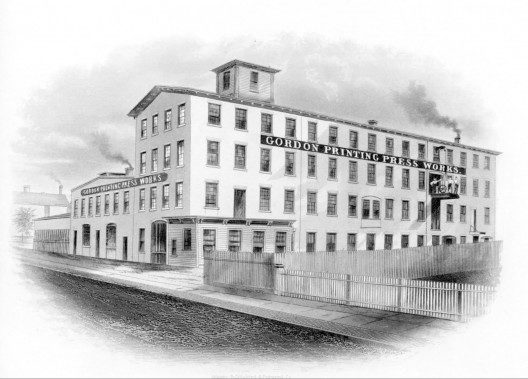 When the time for his patents to expire drew near, Gordon devised some changes for an Improved Franklin press. One of these was a throwoff, which had been in use on other presses for some time. This press was known in the trade as the “brass arm” Gordon because of a brass name plate on one of the side arms. It never was as popular as the “old-style Gordon,” but it was made and sold in various forms and under eighteen different manufacturers’ labels.

Gordon died January 27, 1878, and left a fortune that was estimated at almost a million dollars. His will was known to exist, but it took his family twelve years to find it. His real legacy was a printing press that became almost universal in printing offices, and which even today can be found in operation in every country in the world.