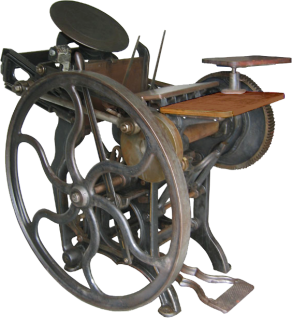 In 1886, William T. Price, a mechanic, and Harrison T. Chandler, an investor, formed a company in Cleveland, Ohio for the production of presses based on Gordon’s old-style Franklin Jobber. The oldstyle C&P shown, built in 1911, is very similar in design to the Gordon Franklin, as is the 8×12 jobber made by Damon and Peets (see Damon & Peets 8×12). Donald Stapells: “This particular press was completely rebuilt in the late fifties or early sixties by the Montreal printing machinery firm of George M. Stewart. Sometime earlier in the history of the press, the flywheel crankshaft was replaced with a straight shaft, and unfortunately the treadle was discarded. It had already been motorized when it arrived at the George M. Stewart shop with a rare variable-speed motor, possibly General Electric, that dates back to approximately the 1920s. Although it weighs 90 pounds, it only develops a half horsepower! The motor required repairs and was also fitted with a speed-control lever that could be reached while feeding the press. An electric impressions counter was installed. At this time the ink fountain pawl actuator system was replaced with one having an improved design. The press continued in use until 1995.”