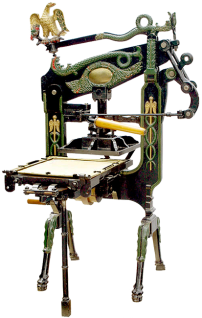 The Columbian press was invented in 1813 by George Clymer (1752-1834), a Philadelphia mechanic. From 1800 Clymer had been building wooden presses, and then versions of the new iron hand presses from Europe. His Columbian was original, not only for its extravagant design but for its levers and counterweights. Like England’s Earl Stanhope, Clymer was one of the first to significantly improve upon the centuries-old design of the common press. After some experimentation, Clymer came to employ a series of power-multiplying compound levers in his presses, which increased the force of the impression while demanding of the printer relatively little effort. The cast-iron eagle atop the press served as a patriotic symbol while acting as an adjustable counterweight to raise the platen after an impression. The Columbian was well-received in America, though at $400 it cost more than twice as much as a wooden press. But Clymer was not satisfied with the market he found in the United States, perhaps because printers were not yet ready to give up their old wooden presses. In 1818 he took his business to England and found much greater success. His first English presses carried his own name; in 1825 William Dixon joined the company and presses showed both names. From the 1840s, they were manufactured by several dozen companies all over Europe. Although Clymer has made and sold presses in Philadelphia, no American Columbians are known to survive. The Washington press came to occupy the place in nineteenth-century American printing offices that the Columbian and Albion were to hold in Britain. This “super-royal” Columbian was made by Ritchie and Son, Edinburgh, around 1860.