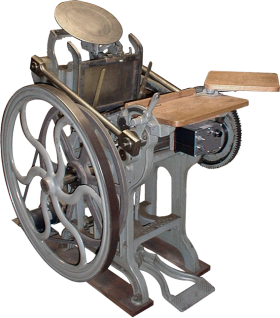 The Damon & Peets Company of New York sold several presses in the late 1800s and early 1900s. An 8×12 press similar to this one is pictured in a 1904 D&P catalog, which claims the press is capable of completing a run of 2000 sheets per hour. The press takes its design from the Gordon Franklin, the most influential jobbing press of the nineteenth century. The D&P has three rollers and a dwell, or pause, on the impression to give the paper sufficient time to absorb the ink and give a clearer impression. The press differs from the Franklin in one significant feature: the D&P has a much shorter throw-off than most jobbers. Also, the throw-off works in the opposite direction from those of most other presses. The press was also made in chase sizes of 9×13 and 10×15 inches. Pictured is the Briar Press workhorse, which has been retrofitted with an electric motor.