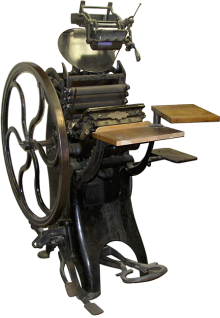 “William Golding of Boston set up shop as a printer’s supply house in 1869 and soon graduated to the manufacture of seals, then small amateur presses, and finally full-sized jobbing presses. Golding first manufactured his Jobber in 1880, eleven years after he introduced the simpler, popular Pearl press (see Pearl OS No.1). The Jobber was, from the start, a heavy-duty trade press. The Official and the Pearl, introduced as presses for amateurs, began themselves to evolve beyond the reach of the amateur. Evidently Golding found that selling to the conventional printing trade was more profitable than selling to amateurs; from the 1880s he began to forswear his earlier amateur connections. Nevertheless, he continued to advertise do-your-own-printing outfits. After Golding’s death, his company was sold to the American Type Founders Company, and later to the Thomson National Press Company. Len Carrick writes, “”I ran the serial numbers, and found that this press left the factory on May 6, 1888. It has been in my family since 1914.””