Please share your knowledge on this topic. This article needs:
A Description 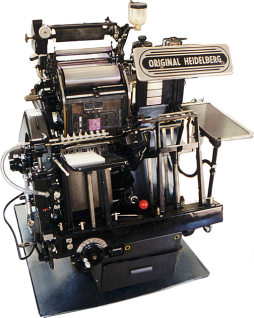 Once the workhorse of print shops all across the world, the Heidelberg company’s definitive fully automatic platen press is universally loved and revered for its robustness, longevity and reliability.

It’s also fascinating  to watch and listen to as the big air pump sucks up paper and blows printed copy onto the delivery pile, and the press opens and closes with a rhythmic sound pattern reminiscent of a living animal.

A key feature of the design is the rotating gripper attached to the moving platen, which grips and releases the paper stock.  It’s this gripper which has stimulated American owners to dub it “the windmill”.  It’s also the reason why the presses have a large metal plate embossed “Original Heidelberg” high on the front.  Without it, it’s too tempting to bend over the finished stock to inspect one’s handiwork, only to receive a severe facial injury from the rotating gripper.  For this reason later machines feature an interlock which stops the press when the guard plate is lifted.

Full adjustability is a key feature of the Heidelberg platens – impression weight is simply changed by rotating the impression control, whereas pushing and pulling it changes the platen travel so that impression is switched “off” and “on”.  But that’s just the basics. Tweaks and adjustments are provided for every aspect of the printing operation, from ink flow through platen leveling, and roller height to delivery “blow” airflow.

Through the long manufacturing run, many evolutionary changes were made to the basic press design. The makers added features such as central lubrication and washup facilities.  A large-format platen version (13″x18″) was developed alongside the original 10″ x 15″ although the smaller press still beats its big sister on raw speed.

Many Windmills are still working for a living, especially when converted from plain printing to such activities as hot-foiling, embossing and cutting.  Many are have also retired into basements, garages and museums and a quieter life.

It would be interesting to know how many – how few perhaps – of these robust machines have ever been scrapped.