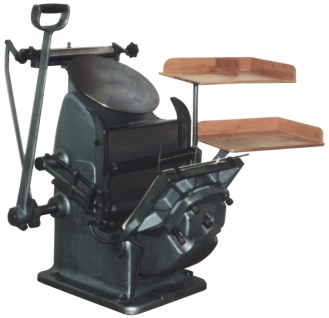 This 500-pound Hohner, a relatively modern press, is shown in the 1976-77 American Printing Equipment catalog, which explains that the press constructed from a single casting designed to keep it free from dirt. Donn Sanford notes: “It’s called a Model D and is essentially a 9″ x 12″. Hohners were made up until a few years ago but apparently the manufacturer still supplies parts.” Steve Saxe adds: “I don’t know anything about this press except that it is German, well-made, very heavy, and that one fell on Dave Churchman’s leg a couple of years ago.”