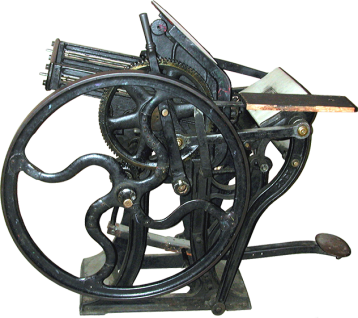 Manufactured by the Cincinnati Type Foundry between 1868 and 1885.

The Cincinnati Type Foundry produced both an early style and late style Nonpareil press in multiple sizes beginning in 1868. It used a double action fixed bed mechanism and was first to feature a throw-off lever. Both early and late style Nonpariel presses were available with either fountain or roller ink distribution configurations.

The Nonpareil job press was a product of the Cincinnati Type Foundry and Printers Warehouse between the late 1860s and the mid-1890s when CTF was merged into the American Type Founders (ATF). The press was probably designed by the skillful engineer Henry Barth, who also designed the Barth type caster used for many years by ATF. At least three sizes of the early model Nonpareil were built: 9×12, 10×15, and 12×17. The slightly later version of the press—which had a different frame design, used drum inking instead of the earlier ink disc, and had different feed and delivery boards—was available in four sizes, from 6×12 to 15×25. 1

Several unusual features of the Nonpareil made for improved quality of printing. The platen, mounted on long legs pivoted on the base of the frame, closed on the type form with nearly parallel motion, thus assuring even impression. The platen also rocked back to nearly horizontal position for feeding, with a long dwell in that position. In another innovation, impression could be easily varied because the bed was spring-loaded against a vertically sliding wedge located behind it, which had an adjustable stop. The throw-off slid the wedge out part way, so that the type form was not inked when the throw-off was operated. Throwing off the impression was an awkward process, however, as the handle for the throw-off was inconveniently located and operated under the left side of the feed board.