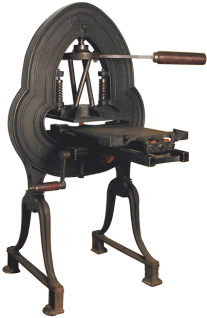 The Stansbury press was patented April 7, 1821, by the Reverend Abraham Ogier Stansbury (1776-1829). Born in Philadelphia in 1776, Stansbury was, according to S.O. Saxe, “at various times, a bookseller and publisher, grocer, one of the first superintendents of a school for the deaf in the United States, the first person to make a lithograph in New York, ordained minister, and inventor.” By 1822, Stansbury had given the Cincinnati Type Foundry (see also their Smith [Cincinnati] press) the rights to manufacture his press, which the Foundry first made in all-wood and hybrid wood-and-iron models before it ultimately built the press with an entirely cast-iron frame. There are five known surviving Stansbury presses, not counting those later made by Isaac Adams, a press inventor in Boston; and by R. Hoe & Company, which bought the Adams firm and continued to manufacture the press until 1885. The press employs a toggle mechanism that differed from those of the Columbian, Ruthven, and Wells presses that had preceeded it. Known as the torsion toggle, it consisted of straight, inclined rods that would in operation force the platen downward to make the impression. This press was most likely made by Isaac Adams because it has no markings. Hoe generally cast their name clearly in the rails of their presses. Phil Weimerskirch, philipwh&lori.state.ri.us: “Stansbury was a publisher and bookseller in New York from about 1798 until 1804. I don’t know where Steve got the information that Stansbury was a grocer. He didn’t get it from me. Stansbury was the first superintendent of the first American school for the deaf, the American Asylum for the Deaf and Dumb in Hartford. He was there for just one year, 1817-1818. Then he became the superintendent of the New York Institution for the Education of the Deaf and Dumb, and he remained until 1821. In May, 1821, he went to Russia, and while he was abroad, Elihu White sold Stansbury presses in New York for a commission of $10 each. White had a type foundry in New York, and in 1817 he established a branch of his firm in Cincinnati that he called the Cincinnati Type Foundry. I am writing an article on Stansbury for ‘Printing History,’ and I have been doing research on him for many years.”