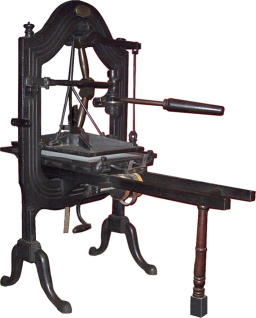 John I. Wells (1769-1832), was born in East Hartford, Connecticut where he later returned to set up his own business. He made furniture and mattresses before becoming a supplier of high-quality printers ink. To aid in his ink business, Wells devised and patented a press with a lever toggle joint, which he later determined would be an improvement over the screw of the common and Ramage presses. His improved lever printing press, which he patented in 1819, was the first American iron lever press (after Clymer left the country with his Columbian), and the first press made in America that didn’t use the screw or compound toggle levers, as the Columbian, Stanhope, and Ruthven presses did. Originally Wells hung a heavy iron ball at the side of the press which served as a counterweight to raise the platen after an impression was made. The ball was later replaced by springs which performed the same function more effectively. Wells contended that the presses made by both Stansbury and Smith infringed on his patent (see the Smith for more information). Ultimately, the Smith and the very popular Washington presses, developed in the 1820s, elipsed Wells’ presses, though he did sell a good number. Manufacture ceased when Wells died in 1833. The press shown is one of the earliest Wells presses surviving. Its platen was extended by a 1-inch iron strip bolted to the rear edge. The platen size including the extension is 30 1/2 x 21.”