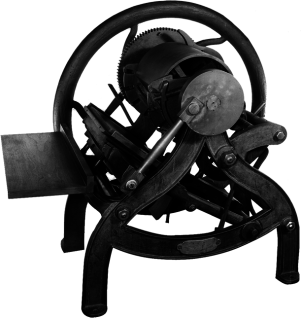 There are less than six known surviving printing presses made by the Boston inventor and press maker Stephen P. Ruggles (1808-1880). Ruggles patented his Card & Billhead press in 1851. (No relation to the Card & Billhead made by Boston & Fairhaven Iron Works in 1871.) It was one of a new breed of jobbing presses with the bed and platen more or less vertical, hinged together below their lower edges. Just three years later, Ruggles sold all his printing press patents and his business to the S.P. Ruggles Power Press Manufacturing Company of Boston, which began manufacturing the Card & Billhead press that same year. One of these presses is hidden amongst the rare books collection at Harvard University’s Houghton Library. It has the original maker’s label, plus some old dark green paint with red pinstriping.